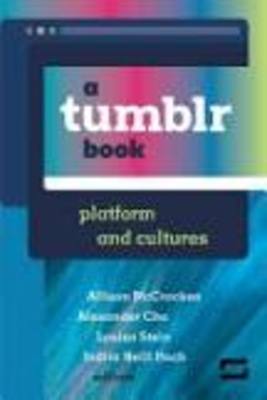 A Tumblr Book: Platforms and Culture

This book takes an extensive look at the many different types of users and cultures that comprise the popular social media platform Tumblr. Though it does not receive nearly as much attention as other social media such as Twitter or Facebook, Tumblr and its users have been hugely influential in creating and shifting popular culture, especially progressive youth culture, with the New York Times referring to 2014 as the dawning of the “age of Tumblr activism.” Perfect for those unfamiliar with the platform as well as those who grew up on it, this volume contains essays and artwork that span many different topics: fandom; platform structure and design; race, gender and sexuality, including queer and trans identities; aesthetics; disability and mental health; and social media privacy and ethics. An entire generation of young people that is now beginning to influence mass culture and politics came of age on Tumblr, and this volume is an indispensable guide to the many ways this platform works. Source: Publisher