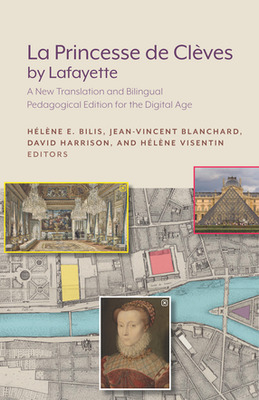 This work is licensed under a Creative Commons Attribution-NonCommercial 4.0 International License.

La Princesse de Clèves, written in 1678 by Marie-Madeleine Pioche de La Vergne, countess of Lafayette, is widely known as the first modern French novel. This open-access pedagogical translation and edition draws on the digital format to offer a rich variety of materials for readers of French and English. Translator’s notes enhance the fresh and lively translation, actively comparing the current version with earlier editions to heighten awareness of linguistic nuance and complexity. Interactive paragraphs and lexical definitions encourage readers to move with ease between the French and English texts. Accompanying didactic essays empower readers to reflect on Lafayette’s vocabulary and on practices of translation more broadly.

This ebook edition offers pedagogical dossiers and a variety of innovative resources influenced by the Digital Humanities, such as a mapping interface with georeferenced historical maps, word mining exercises, a digital timeline, and social network analyses. In addition to overviews of Lafayette’s milieu and adaptations of La Princesse de Clèves, the editors also include excerpts from rarely-translated letters published in an early modern gazette in response to the novel. These features enable a new generation of readers to grasp the seventeenth-century public’s reaction to Lafayette’s work.

Drawing on the affordances of the digital format to promote multilingualism and humanistic inquiry, the edition simultaneously encourages active engagement with the specificities of a particular language and culture. This project results from a collaboration between four professors who teach at liberal arts colleges and argues for critical approaches to digital technologies to celebrate a classic text.