Seeing Like an Activist: Civil Disobedience and the Civil Rights Movement 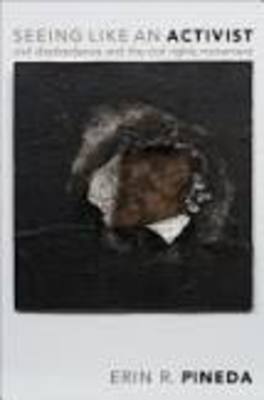 Link to eBook, also available in the catalog in print.

There are few movements more firmly associated with civil disobedience than the Civil Rights Movement. In the mainstream imagination, civil rights activists eschewed coercion, appealed to the majority's principles, and submitted willingly to legal punishment in order to demand necessary legislative reforms and facilitate the realization of core constitutional and democratic principles. Their fidelity to the spirit of the law, commitment to civility, and allegiance to American democracy set the normative standard for liberal philosophies of civil disobedience. This narrative offers the civil disobedience of the Civil Rights Movement as a moral exemplar: a blueprint for activists who seek transformative change and racial justice within the bounds of democracy. Yet in this book, Erin R. Pineda shows how it more often functions as a disciplining example a means of scolding activists and quieting dissent. As Pineda argues, the familiar account of Civil Rights disobedience not only misremembers history; it also distorts our political judgments about how civil disobedience might fit into democratic politics. Seeing Like an Activist charts the emergence of this influential account of civil disobedience in the Civil Rights Movement, and demonstrates its reliance on a narrative about black protest that is itself entangled with white supremacy. Liberal political theorists whose work informed decades of scholarship saw civil disobedience "like a white state": taking for granted the legitimacy of the constitutional order, assuming as primary the ends of constitutional integrity and stability, centering the white citizen as the normative ideal, and figuring the problem of racial injustice as limited, exceptional, and all-but-already solved. Instead, this book "sees" civil disobedience from the perspective of an activist, showing the consequences for ideas about how civil disobedience ought to unfold in the present. Building on historical and archival evidence, Pineda shows how civil rights activists, in concert with anticolonial movements across the globe, turned to civil disobedience as a practice of decolonization in order to emancipate themselves and others, and in the process transform the racial order. Pineda recovers this powerful alternative account by adopting a different theoretical approach--one which sees activists as themselves engaged in the creative work of political theorizing. Source: Publisher