Thus Have I Seen: Visualizing Faith in Early Indian Buddhism 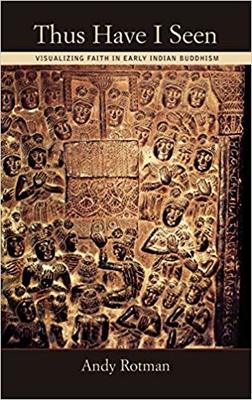 Although Buddhism is often depicted as a religion of meditators and philosophers, some of the earliest writings extant in India offer a very different portrait of the Buddhist practitioner. In Indian Buddhist narratives from the early centuries of the Common Era, most lay religious practice consists not of reading, praying, or meditating, but of visually engaging with certain kinds of objects. These visual practices, moreover, are represented as the primary means of cultivating faith, a necessary precondition for proceeding along the Buddhist spiritual path. In Thus Have I Seen: Visualizing Faith in Early Indian Buddhism, Andy Rotman examines these visual practices and how they function as a kind of skeleton key for opening up Buddhist conceptualizations about the world and the ways it should be navigated.
Rotman's analysis is based primarily on stories from the Divyavadana (Divine Stories), one of the most important collections of ancient Buddhist narratives from India. Though discourses of the Buddha are well known for their opening words, "thus have I heard" - for Buddhist teachings were first preserved and transmitted orally - the Divyavadana presents a very different model for disseminating the Buddhist dharma. Devotees are enjoined to look, not just hear, and visual legacies and lineages are shown to trump their oral counterparts. As Rotman makes clear, this configuration of the visual fundamentally transforms the world of the Buddhist practitioner, changing what one sees, what one believes, and what one does.